Objective(s):To the best of our knowledge, this is the first report on the contributions of GST genetic variants to the risk of diabetic retinopathy in an Iranian population. Therefore, the objective of this study was to determine whether sequence variation in glutathione S-transferase gene (GSTM1 and GSTT1) is associated with development of diabetic retinopathy in type 2 diabetes mellitus (T2DM) Iranian patients.
Materials and Methods: A total of 605 subjects were investigated in this case-control study; Study groups consisted of 201 patients with diabetic retinopathy (DR), 203 subjects with no clinically significant signs of DR and a group of 201 cases of healthy volunteers with no clinical evidence of diabetes mellitus or any other diseases. The GSTM1 and GSTT1 were genotyped by multiplex-polymerase chain reaction (multiplex-PCR) analysis in all 404 T2DM patients and 201 healthy individuals served as control.
Results: Increased odds ratio showed that GSTM1-null genotype had a moderately higher occurrence in T2DM patients (OR=1.43, 95% CI=1.01–2.04; P=0.03) than in healthy individuals. However, the frequency of GSTT1 genotype (OR=1.41; 95% CI=0.92-2.18; P=0.09) was not significantly different comparing both groups. Although, regression analysis in T2DM patients showed that GSTM1 and GSTT1 genotypes are not associated with T2DM retinopathy development.
Conclusion: Our findings suggest that GSTM1 and GSTT1 genotypes might not be involved in the pathogenesis of type 2 diabetes mellitus retinopathy in the Southern Iranian population. However, further investigations are needed to confirm these results in other larger populations.

Chronic hyperglycemia in diabetes stimulates reactive oxygen species (ROS) production with development of microangiopathic complications such as diabetic retinopathy (DR) and diabetic nephropathy (DN) (1). DR is the major cause of blindness in adults over 40 years of age and is associated with endothelial cell proliferation (1). Duration of diabetes and also poor glycemic control are the most important factors in prevalence of DR (2). During the first two decades of disease, almost 29–78% of patients with type 2 diabetes show signs of DR; however, some people who have a long duration of diabetes do not show any symptoms of DR. Therefore, genetic risk factors are thought to play a role in development of DR (3-5). Identifying the candidate genes which contribute to diabetic retinopathy pathogenesis is more challenging due to the complexity of the disease (3, 5). Antioxidant enzymes such as manganese superoxide dismutase

GSTM1 (GST-mu) and GSTT1 (GST-theta) are two classes of multi-functional GST enzymes involved in the detoxification of a wide variety of toxic and carcinogenic compounds (9-11). Gluthatione and GSTs take part in the antioxidant defense mechanisms against an extensive array of free radicals that are formed during oxidative stress in diabetes especially in ocular tissues (12). Glutathione S-transferases (GSTs) are a group of candidate genes whose polymorphisms have been associated with the development of chronic diseases like type 2 diabetes mellitus (T2DM) and malignancies (13–16). One important polymorphism accompanied by lacking enzyme activity is GSTM1 and GSTT1 null mutation (17, 18). Homozygous deletions of either GSTM1 or GSTT1 have no functional enzyme activity. The GSTM1and GSTT1 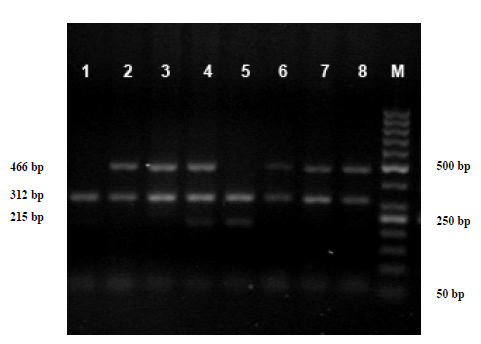 Many studies have evaluated the association between GST polymorphism and macrovascular complications of diabetes; yet few published articles have investigated the possible correlation of these polymorphisms with DR and DN as microvascular diabetic complications in Caucasian population. Cilenšek et al, found that GSTT1-null genotype was associated with greater risk of DR (19). Another study by Hovnik et al reported that GSTM1-present genotype was more frequent in patients with DR (20).

The objective of the current study was to determine the frequency of GST genotypes in T2DM patients with DR and find the possible relation between GSTs gene polymorphism and diabetic retinopathy in an Iranian population.

Studied individuals consisted of 404 Iranian patients (T2DM without DR; n=203 and T2DM with DR; n=201) of more than 10 years' duration from Nemazi Hospital, affiliated to Shiraz University of Medical Sciences. Out of 201 controls, none had a history of retinopathy or diabetic ailments. The clinical and demographic data, including body mass index (BMI), age, gender, duration of diabetes, blood glucose, and HbA1c were obtained from the study subjects during the time of blood collection. The American Diabetes Association Guidelines (21) were followed to identify the T2DM patients.

The patients underwent a complete ocular examination including visual field testing, slit indirect ophthalmoscopy and lamp biomicroscopy. The findings were recorded by an ophthalmologist experienced in diagnosis of diabetic retinopathy (22). Prior to the commencement of the research, informed consents were obtained from participants according to the ethics committee approval.

Genomic DNA was extracted from whole blood by Cinnagen Kit DNPTM protocol (DNG plus DNA Extraction Kit, Sinagene Company, Tehran, Iran). The multiplex PCR was performed for detection of presence or absence of GSTM1 and GSTT1 genotypes and a part of exon-7 CYP1A1 gene was amplified and used as an internal control in this method. GSTM1, T1 and exon-7 CYP1A1 fragments were amplified by using the following primers (7, 8):

Comparisons between continuous variables were made by t-test. Also, Chi-Square (χ2) test was used for comparisons among categorical variables. Odds ratios (ORs) and 95% confidence intervals (CIs) were calculated for the genetic variants and their risk for developing the disease by logistic regression analysis. All of our statistical analysis was performed with SPSS software (Statistical Package for the Social Sciences, version 16, SSPS Inc., Chicago, IL, USA). Statistically significant differences were accepted for P≤0.05.

To investigate the association of GSTM1 and T1 gene polymorphism with diabetic retinopathy, 404 patients (T2DM-DR=201 and T2DM=203) and 201 controls were involved in this study which were matched for their gender and age. The results of basic demographic data and clinical laboratory tests showed no significant differences between the three populations in mean age (51.3±8.6 vs. 52.7±10.1 vs.

a  Significant differences between groups (P < 0.05). Data are reported as means ± SD

Diabetes is associated with a high endogenous inflammatory load and oxidative stress with an increased susceptibility to microvascular angiopathy such as DR. It is believed that ROS activates the STAT3 pathway and up regulates retinal vascular endothelial growth factor (VEGF), an angiogenic factor that enhances abnormal blood vessel growth. Oxidative stress also induces apoptosis of vascular cells under hyperglycemic conditions (23, 24).The GST enzymes catalyze the conjugation of glutathione to a wide variety of electrophiles and represent a protective mechanism against oxidative stress            (25- 27).

In different ethnic groups, polymorphisms in GST encoding genes were associated with increased risk of diabetes and macrovascular or microvascular complication development. In Egypt, the GSTT1- and GSTM1-null genotypes were significantly more prevalent in diabetic individuals, and patients carrying both null polymorphisms had a 3.17-fold increased risk of having type-2 diabetes mellitus (28). Another study from India, reported a significant association of GSTM1 null with T2DM with no significant association with GSTT1 null genotype (8).

However, in a study on Indian patients, significant differences were observed in the distribution of both GSTM1 and GSTT1 polymorphisms between T2DM patients and asymp­tomatic carriers (29). In our population, we recently found that the frequency of GSTM1-null genotype in the diabetic group was significantly higher than that in control. The combination of GSTT1-null and GSTM1-null genotypes was significantly higher in patients compared to controls (30).

GSTT1-present and GSTT1-present/GSTM1-null represented a risk factor for cardiovascular autonomic neuropathy development in Slovak adolescents with type 1 diabetes mellitus (31). Homozygous deletion of the GSTT1 gene is a risk factor for developing end-stage renal disease (ESRD) in diabetic patients from Taiwan. No association between homozygous deletion of GSTM1 and development of ESRD was found in either diabetic patient (32). Fujita et al, suggested that GSTM1 null genotype was not contributive to the development of diabetic nephropathy in Japanese type 2 diabetic patients (33). A study carried out by Ramprasath et al, demonstrated that GSTT1-null genotype had a moderately higher occurrence in T2DM with coronary artery disease (CAD) patients than T2DM patients without CAD (29).

The present study was carried out to investigate the relationship between genetic polymorphism of GSTM1, GSTT1, and the risk of DR development. We

Table 4. Frequency distributions of GST genotypes and their relationship with the risk of T2DM

A few studies with different conclusions have been conducted in different populations in order to find any association between GSTM1 and GSTT1 polymorphisms and DR. A study carried out by Doney et al, demonstrated that GSTT1-null individuals have a more generalized vasculopathy with an increased risk of progression of both retinopathy and nephropathy (34).

The results of our study were not in accordance with the results of above mentioned studies. The conflicting results obtained by research in different populations might be attributed to the interaction between different genetic and environmental factors. DR has a complex pathobiologic network and chronic inflammation with cytokines like leukotrienes has been implicated in this process. Poor glycemic control is one of the most important non-genetic risk factors for diabetic retinopathy (35–38).

Other genetic polymorphisms in antioxidant enzymes such as manganese superoxide dismutase (MnSOD) and catalase (CAT), which directly eliminated ROS, may influence our results (20). Moreover, differences in ethnic background of each population influences the risk of T2DM and DR. To the best of our knowledge, this study is the first to report on the contributions of GST genetic variants to the risk of diabetic retinopathy in an Iranian population.

Our findings suggest that GST allelic variants are not associated with individual susceptibility to diabetic retinopathy. However, our study sample was relatively small and further studies with larger samples are warranted to confirm our results.

The authors declare no conflict of interest for the present research outcome.