Objective(s):Antibodies against actin, as one of the most widely studied structural and multifunctional housekeeping proteins in eukaryotic cells, are used as internal loading controls in western blot analyses. The aim of this study was to produce polyclonal antibody against a synthetic peptide derived from N-terminal region of β-actin protein to be used as a protein loading control in western blot and other assay systems.
Materials and Methods: A synthetic peptide derived from β-actin protein was designed and conjugated to Keyhole limpet hemocyanin (KLH (and used to immunize a white New Zealand rabbit. The antibody was purified from serum by affinity chromatography column. The purity of the antibody was determined by SDS-PAGE and its ability to recognize the immunizing peptide was measured by ELISA. The reactivity of the antibody with β-actin protein in a panel of different cell lysates was then evaluated by western blot. In addition, the reactivity of the antibody with the corresponding protein was also evaluated by Immunocytochemistry and Immunohistochemistry in different samples.
Results: The antibody could recognize the immunizing peptide in ELISA. It could also recognize            β-actin protein in western blot as well as in immunocytochemistry and immunohistochemistry.
Conclusion: Our data suggest that this antibody may be used as an internal control in western blot analyses as well as in other immunological applications such as ELISA,immunocytochemistry and immunohistochemistry.

Actin is one of the most widely studied structural and multifunctional proteins in eukaryotic cells (1, 2). It has important roles in many cell functions such as maintenance of cytoskeleton, cell motility, adhesion, endocytosis, exocytosis, secretion, signal transduction, and other activities (3-5). Among its three main isoforms (α, β and γ), α-actin is normally found in smooth muscle cells whereas β- and γ-actin isoforms are found in all cells (6). Antibodies against β-actin and other housekeeping gene-encoded proteins, like β-tubulin and glyceraldehyde-3-phosphate dehydrogenase (GAPDH), are used as internal loading controls in western blot analyses          (7, 8).

The aim of this study was to produce polyclonal antibody against a synthetic peptide derived from N-terminal region of β-actin protein to use as a protein loading control in western blot and other assay systems.

Design of peptide and conjugation to carrier protein

A 12-mer peptide (DDDIAALVVDNG) from the N-terminal region of β-actin protein was designed. The immunograde peptide was purchased (Thermo Electron Corporation, GmbH,  Ulm, Germany) and then conjugated to Keyhole limpet hemocyanin (KLH) and Bovine serum albumin (BSA) (Sigma, St. Louis, MO) via glutaraldehyde as linker separately and simultaneously using the same buffer systems and methods as described (9).The peptide–KLH conjugate was used for rabbit immunization and the peptide-BSA was used for conjugation efficacy assessment.

To check the efficacy of conjugation, 10 µg of peptide-BSA was run on 10% SDS-PAGE using a mini-PROTEAN electrophoresis instrument (Bio-Rad Laboratories, Philadelphia, PA). The gel was stained with Coommassie Blue R-250 (Sigma). The BSA-peptide conjugate was used to test the conjugation efficacy, since the KLH-conjugate was a very large protein conjugate to enter the separating gel during electrophoresis, and thus impossible to be evaluated by SDS-PAGE directly.

A female white New Zealand rabbit was immunized 5 times with two-week intervals for each injection. In the first immunization, 250 μg KLH-peptide and an equal volume of Freund's complete adjuvant (Sigma) were mixed and injected intramuscularly into the femoral muscle. For the subsequent immunizations, 125 μg peptide-KLH was emulsified in Freund's incomplete adjuvant (Sigma) and injected.

Titration of antibody in serum samples

Before each immunization, blood was drawn by venous puncture from the rabbit ear and allowed to clot for 2 to 3 hr at room temperature before preparation of sera. Titration of the specific polyclonal antibody was then performed using ELISA (10).

Rabbit sera were filtered through 0.45 μm filters and antibody was purified by affinity chromatography column prepared by coupling the immunogenic peptide to CNBr-activated sepharose 4B (GE Healthcare, Uppsala, Sweden). The recovery of the antibody, the evaluation of its reactivity with immunizing peptide and the assessment of its purity were performed as described previously (10).

The ability of the antibody to recognize β-actin was assessed by western blotting. Different samples were collected and each was lysed in 1 ml of lysis buffer containing 1% Triton X-100, 50 mM Tris-HCl, pH 7.4, 150 mM NaCl, 5 mM EDTA, and 1% protease inhibitor cocktail (Sigma) for 1 hr on ice with 15 min  intervals of vortexing for 30 sec. The cell lysates were then centrifuged at 500× g for 30 min.                    The supernatants were collected and protein concentrations in the lysates were measured by BCA Protein Assay Kit according to the manufacturer’s instructions (Thermo Scientific, IL, USA). Twenty μg of each sample was run on a 10% SDS-PAGE (100 V for 2 hr) under both reduced and non-reduced conditions. After electrophoresis, the resolved proteins were transferred onto Immobilon-PVDF membranes (Millipore Corporation, USA). The membranes were blocked overnight at 4°C with 5% non-fat milk in PBS containing 0.05% Tween 20 (PBS-T). All antibody incubations were performed in PBS-T containing 3% non-fat milk. Filters were incubated with 10 μg/ml of anti-β-actin antibody for 1.5 hr at room temperature. After extensive washing with PBS-T, the filters were incubated with peroxidase-conjugated sheep anti-rabbit immunoglobulins (Avicenna Research Institute, Tehran, Iran) for 1 hr at room temperature followed by washing and developing with ECL chemiluminescent detection system (GE Healthcare, Uppsala, Sweden). Negative controls were used                      to check the probable interaction with secondary antibody (HRP-conjugated sheep anti-rabbit antibodies), which included all the above-mentioned steps except for adding the anti-β-actin antibody to the membranes.

In order to determine the minimum concen-tration of lysate proteins that could show a clear band in western blot with the antibody, a gradient of protein concentrations (0.5-20 μg) of Jurkat cell line lysate were used in the assay under non-reduced conditions. 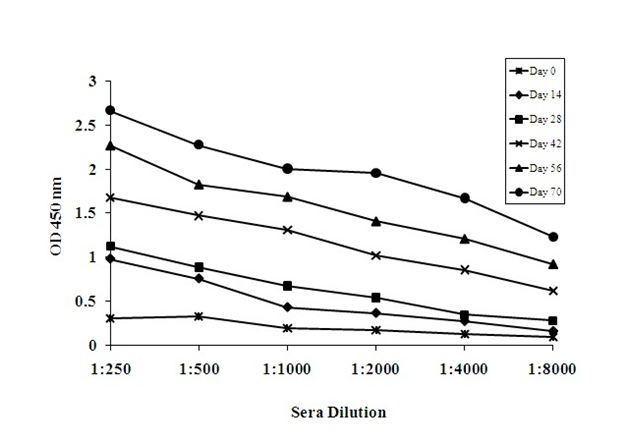 and after immunization. As shown in Figure 1, the antibody titer in the rabbit serum continuously increased upon repeated immunizations.

SDS-PAGE analysis of the purified antibody showed the presence of a single band of about 150 kDa indicative of the desired purity (Figure 2). ELISA assay showed that the antibody had excellent immunoreactivity with the immunizing peptide, confirming its functionality after purification. In addition, lack of reactivity of the antibody with an irrelevant peptide and BSA, as an irrelevant protein, confirmed its specificity for the immunizing β-actin peptide (Figure 3). 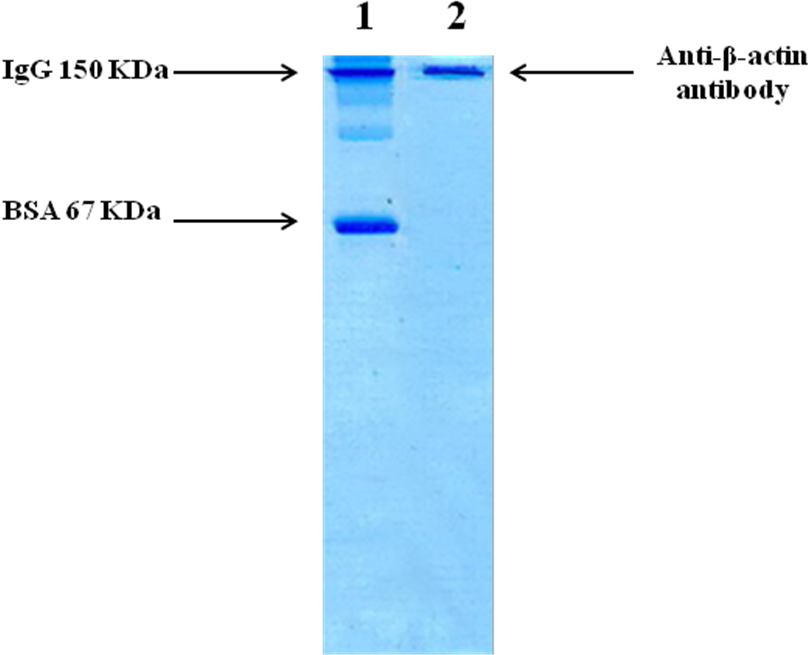 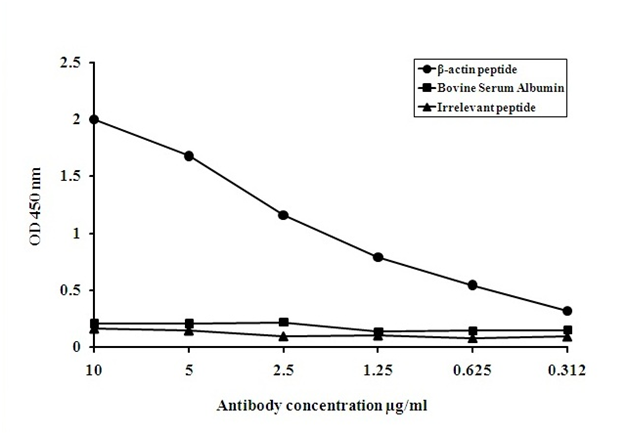 To determine the reactivity of the purified polyclonal antibody to its corresponding protein, western blot assay was performed using samples from different origins. The antibody could recognize a band of about 45 kDa, representative of β-actin protein in all samples under reducing-conditions except for Coral and Crab (Figure 4A). The antibody could also interact with most samples being included under non-reducing conditions except for HeLa, Rose Aphid, Coral, Shrimp, Crab and Drosophila (Figure 4B). Furthermore, western blot on a gradient of different amounts (0.5 to 20 µg) of Jurkat cell lysate proteins revealed that the antibody could interact with β-actin content of a minimum amount of 2.5 µg of total proteins in the lysate (Figure 5).

Immunofluorescent assays were performed using anti-β-actin antibody and six randomly selected samples. The green fluorescence is indicative of the interaction of the antibody with β-actin in all samples (CHO, Jurkat and PBMC) in ICC (Figure 6A) as well as (Crab, Gold fish and Neon fish) in IHC (Figure 6B). The blue color represents the staining of nuclei by DAPI.

Western blot analysis is a widely used semi-quantitative method for specific determination of protein expression (13). When a negative sample is encountered in western blot, it may be interpreted as negative. However, to ensure that the result is not a false negative due to sample preparation errors or other experimental faults, it is necessary to have appropriate controls. Although there are some reports regarding different expression profiles of the 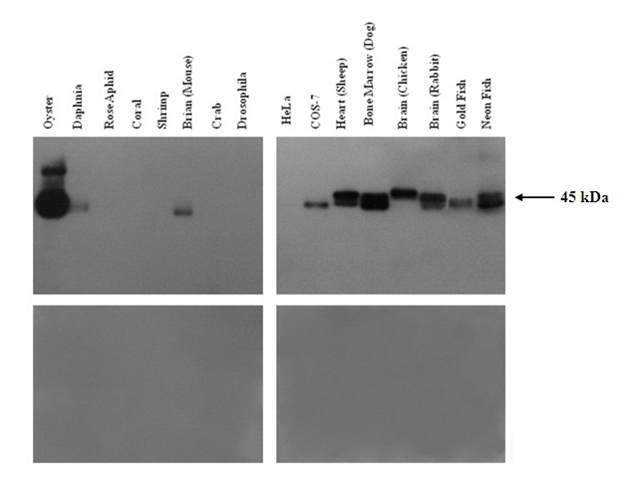 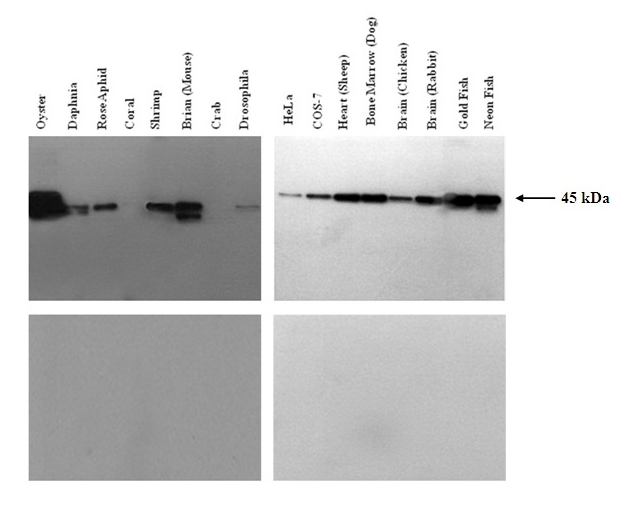 Figure 4. Analysis of reactivity of anti-β-actin antibody with lysates from a panel of organisms with different origins by western blot. A panel of tissue samples from different organisms were lysed and subjected to western blot under reducing (A) and non-reducing (B) conditions. The lower panels are negative controls where no anti-β-actin antibody was used

In this study, we produced and characterized a polyclonal antibody against a synthetic peptide derived from β-actin protein. The peptide sequence encompasses a conserved region of β-actin expressed by many (but not all) organisms with different origins. Interestingly‚ the antibody did not react with lysates from Coral and Crab‚ while it showed reactivity with that from the other organisms. This may be because the antibody was made against a selected peptide from human β-actin and its lack of reactivity with Coral and Crab might be a consequence of the absence of the antibody epitope on the actin molecules from these organisms, which may in turn be due to differences        in amino acid sequences, post translational modifications  or differential RNA splicing events. This was also confirmed when amino acid sequences of the 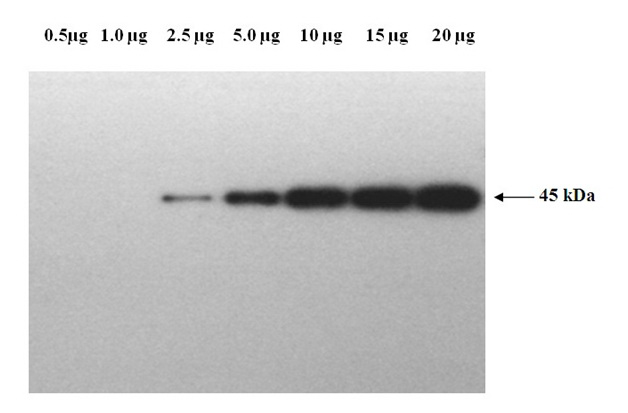 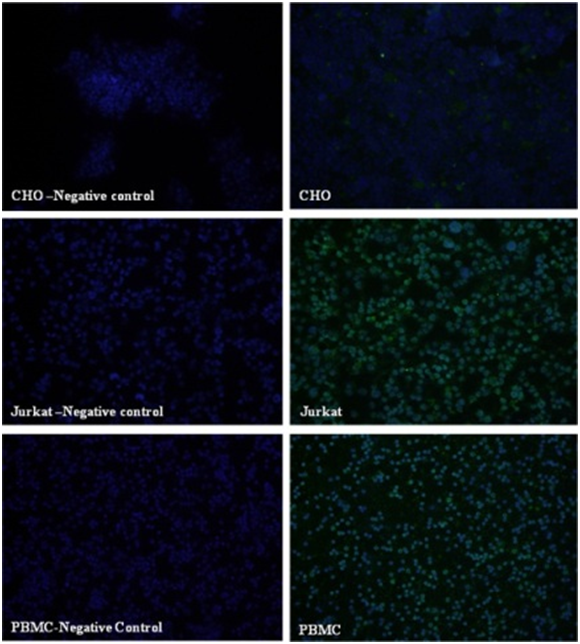 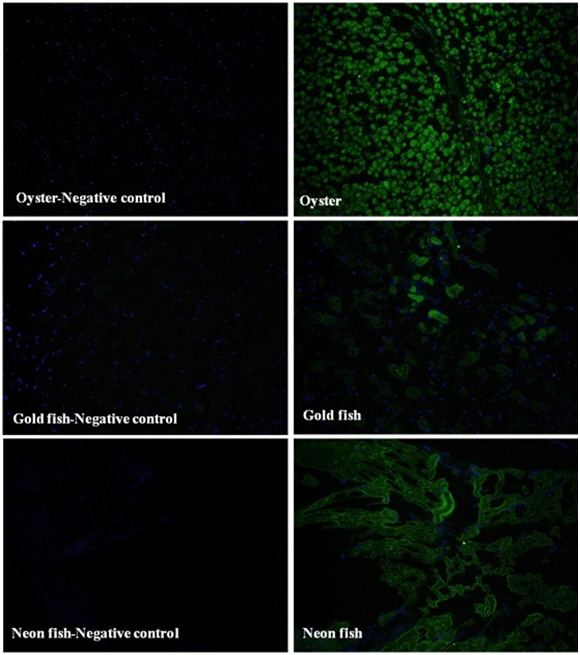 β-actin molecules from such organisms were compared in protein blast database (http://blast.ncbi.nlm.nih.gov) where differences were observed (data not shown).

Although the main aim of this study was to produce an antibody against β-actin to be used as internal control in western blot analyses‚ our data suggest that the antibody may be used in other immunological applications such as ELISA, Immunocytochemistry and immunohistochemistry.

The results presented in this paper were part of student thesis. The authors would like to  express their sincere gratitude to the staff of Antibody- Antigen Engineering (AAE), Immunochemistry and Immunohistochemistry Laboratories of the Avicenna Research Institute, Tehran, Iran for their cooperation.