Diabetes is a metabolic disorder that affects more than 100 million people worldwide. This disease occurs due to absolute or relative deficiency of insulin secretion with or without varying degrees of insulin resistance (1). Diabetics have high blood sugar levels; regardless of the type of diabetes, patients are required to control their blood glucose with medications or by an exercise program. Of various enzymes in the digestive tract, pancreatic α-amylase (E.C. 3.2.1.1) digests carbohydrates to glucose. α-amylases constitute a family of endoamylases that catalyze the cleavages of α-D-(1-4) glycosidic bonds (2). Carbohydrates are the major constituents of the human diet and mainly play a role in the energy supply. The complex components of dietary carbohydrates should be broken down to monosaccharides by the α-amylase and glucosidases since only monosaccharides can be absorbed from intestinal lumen and transported into blood circulation (3). Retardation of carbohydrate digestion by inhibition of enzymes such as α-amylase would lead to blood glucose level reduction and hence could be considered as a therapeutic strategy for the treatment of diabetes. Alpha-amylase inhibitors therefore have a therapeutic role and one group of drugs introduced in the management of diabetes is the α-amylase inhibitors. Alpha-amylase inhibitors currently in clinical use such as acarbose and miglitol prevent the digestion of carbohydrates and provide short-term glycemic control. The drawback of such inhibitors is their non-specificity in targeting different glycosidases (4). Also these inhibitors are known to produce serious             side effects that limit their use as a therapeutic          drug. Therefore, natural extracts from available traditional medicinal plants are an important area of investigation with great potential for discovery of new antidiabetic drugs. Different plants have been reported to show α-amylase inhibitory activity and so may be relevant to the treatment of diabetes (5). More than 400 traditional plants have been recorded with antidiabetic effects, but very few of these traditional plants have received proper scientific or medical investigation (6).

In recent years, a variety of research has been done on traditional medicinal plants in Iran. The aqueous extract from Urtica dioica plant is traditionally used to treat diabetes in Iran. Gholamhoseinian et al investigated the inhibitory effect of 100 different plant extract on alpha glucosidase. Their results showed that aqueous extract of U. dioica had a poor inhibitory effect on the enzyme (4% inhibition after 30 min incubation). In another study, it has been shown that ethanolic extract from leaf of this plant revealed appreciable α-amylase inhibitory activities in a concentration-dependent manner (7). Juglans regia is another plant with medicinal applications. The leaves of this plant have been used mostly in worldwide traditional medicines and recently there are some reports about the antidiabetic effect of the seed extracts and methanolic leaf extract from   J. regia L. In Iran, there are several in vivo studies about the antidiabetic effect of J. regia L. extract, but no detailed study about the antidiabetic effect of this extracts is available (8). Here, we investigated the effect of these two medicinal plants aqueous leaves extracts on the activity of pancreatic alpha- amylase. The anti-diabetic potency was defined by the inhibition of α-amylase activity. The main goal of this study was determination of the type of alpha- amylase inhibition by these two plant extract. Dixon plot was depicted for 4 different concentration of the extract and probable mechanism of amylase inhibition was revealed.

Fresh leaves of the two plants namely U. dioica and J. regia Linn. were obtained from Golestan Forest of Iran and all of them were botanically identified.

Leaves of U. dioica and Juglans regia were shade dried at room temperature. Dried plant materials were subjected to size reduction to a coarse powder by using dry grinder. 100 g of each of the powder was macerated with 100 ml of sterile distilled water in a grinding machine for about 10-15 min. The macerate was then first filtered through a double-layer muslin cloth and then centrifuged at 3500 rpm for 30 min. The supernatant was then filtered through Whatmann no.1 filter paper. The filtrate was frozen and lyophilized in a lyophilizer at 5 μmHg pressures at -50°C (Labconco, Freezone). The extracts stored at −20°C till further use.

Porcine pancreatic α-Amylase (PPA) activity was determined calorimetrically with soluble starch as substrate. Reducing sugars were measured by the dinitrosalicyclic acid method described by Miller (9). In each reaction 280 μl of 1% (w/v) starch was dissolved in phosphate buffer, pH 7 containing 20 mM CaCl2; 20 μl of enzyme solution containing 20 μg PPA was added, and the samples were incubated at 37°C. The reaction was stopped by adding DNSA reagent.

α-amylase reactions in the presence and absence of the extracts

In order to determine initial rate in the absence of the plant extracts, measurements were carried out over different substrate concentrations (2, 4, 6, 8 and 10 mg/ml). Different blanks were used for each starch concentration. In order to study the initial rate in                 the presence of plant extracts, different substrate solutions, containing various concentrations of inhibitors (U. dioica and J. regia leaf aqueous extracts and acarbose) were preincubated at 37°C for 10 min. The α-amylase reactions were started by adding 20 μl of PPA enzyme solutions to the substrate/inhibitor solutions and then the reaction was stopped in 5 min intervals. One unit of α- amylase was defined as the hydrolysis of 1 μM of reducing sugars (with maltose as the standard) per min under the assay conditions specified.

From the above α-amylase reactions, the initial velocities (V0) were determined from the slope of the linear part of the curves of the amount of product, in terms of mM of maltose equivalents, versus time in minutes. Dixon plots of 1/V0 versus the concentration of the inhibitor for five concentrations of soluble starch and four concentrations of inhibitor were used to determine the type of inhibition. 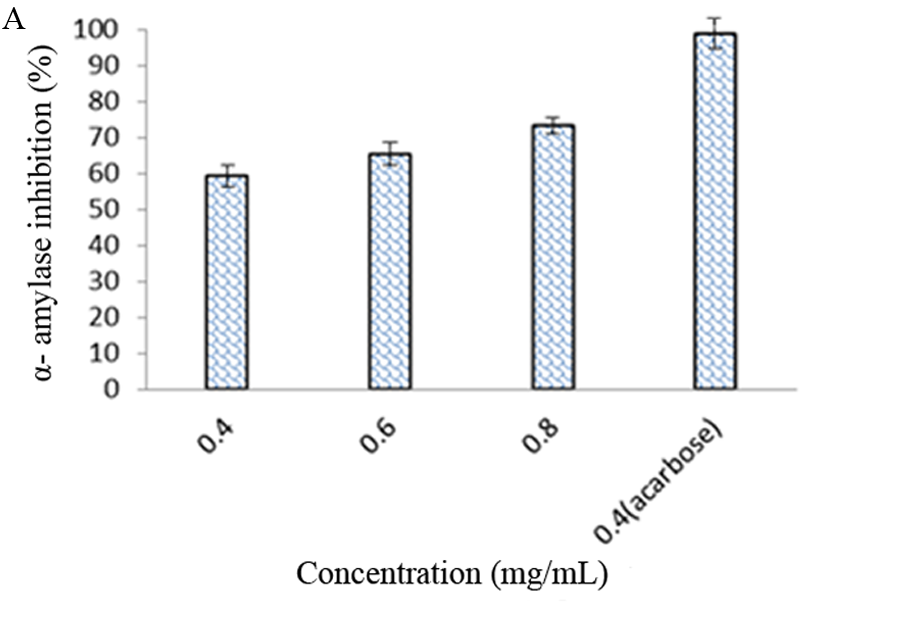 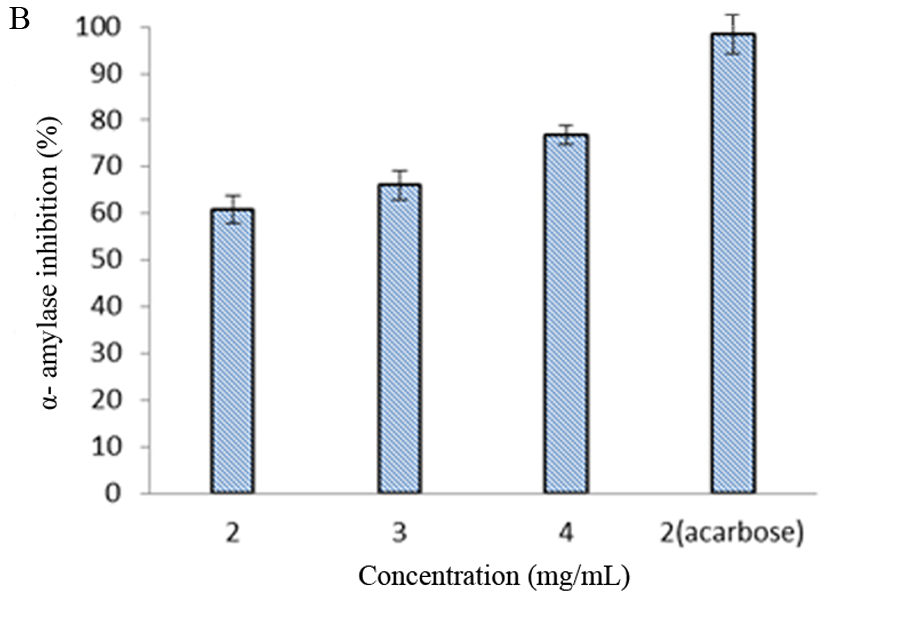 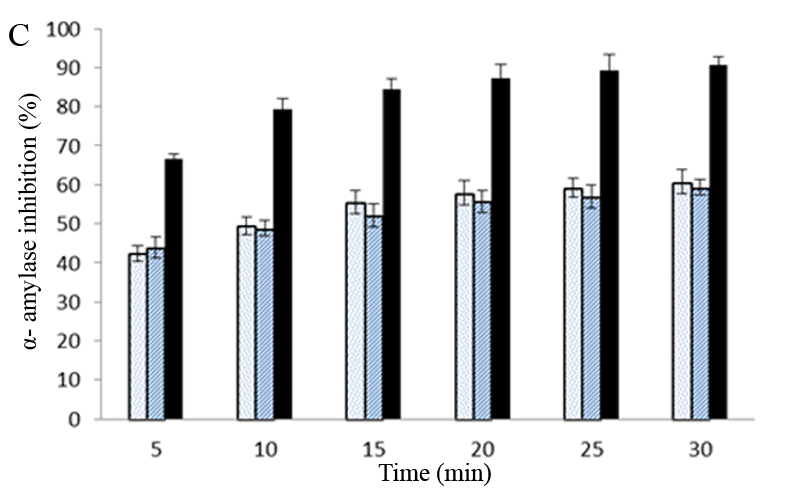 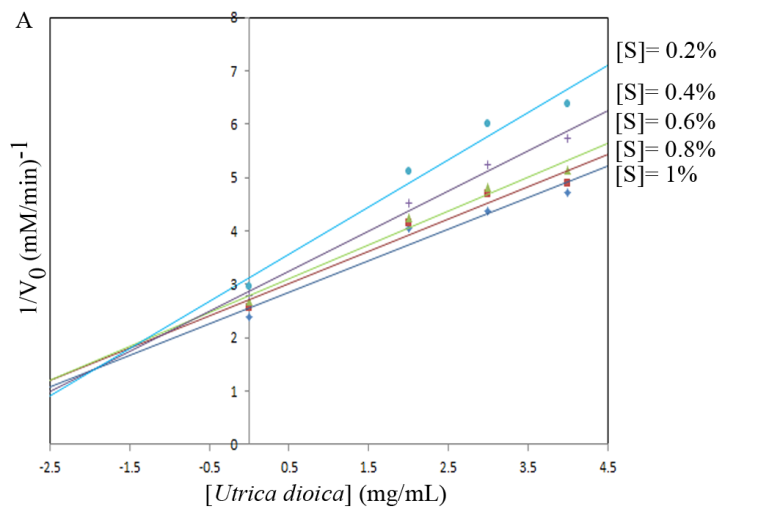 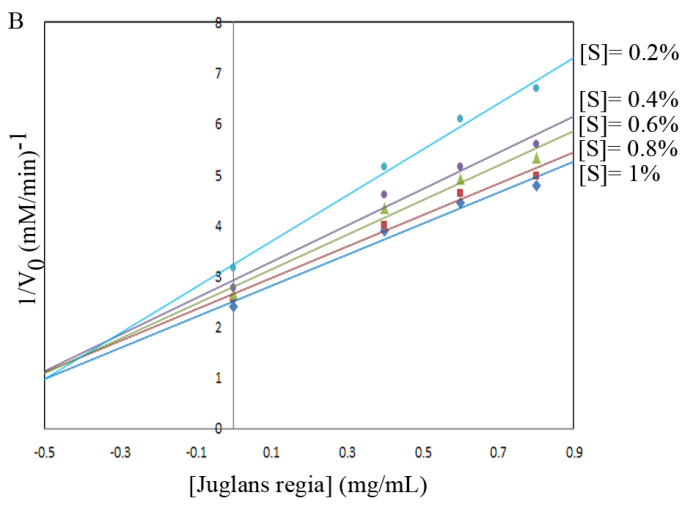 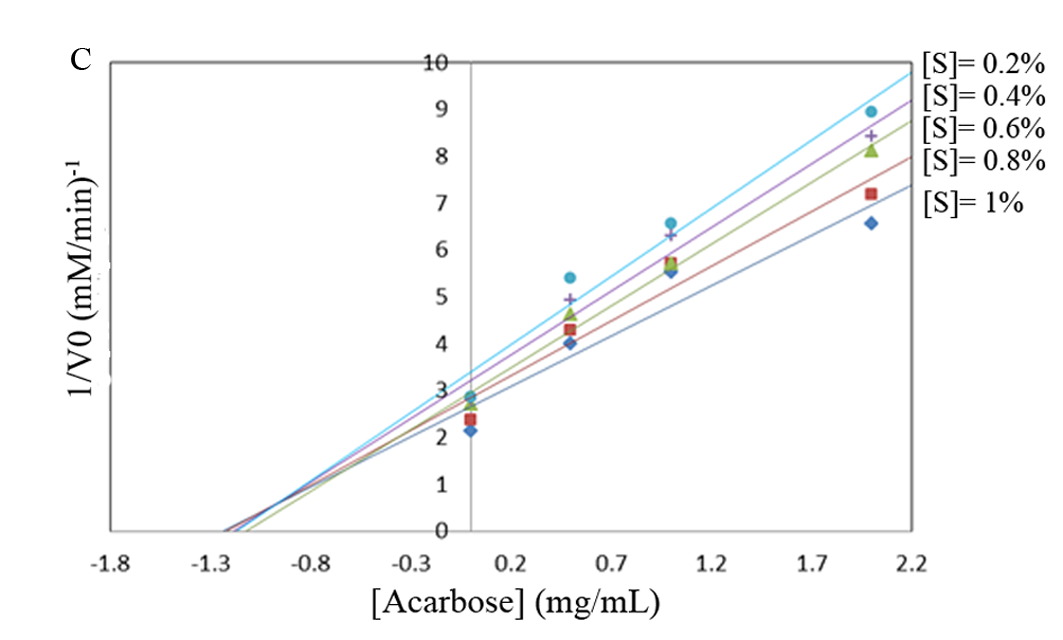 Figure 2. Dixon plots of the reaction of PPA with different concentrations of soluble starch [S] in the presence of (A) Urtica dioica and(B) Juglans regia aqueous extract and (c) Acarbose. Each line represents linear regression analysis of reciprocal of average rates of product formation for different substrate concentrations as a function of inhibitor concentration

V represents the initial velocity (V0) calculated for each reaction and has the value of mM/min. Different blanks were prepared for different enzymatic reactions and all experiments were performed in triplicates.

Determination of the type of inhibition of extracts

The type of inhibition of U. dioica and J. regia extracts and acarbose with porcine pancreatic α- amylase was determined from Dixon plots, a graphical method for determination of the type of enzyme inhibition. The effect of the extract on the enzymatic rate (V0) was determined at five substrate concentrations, and over four inhibitor concentrations [I]. In a plot of 1/V0 against [I] data for each substrate concentration fall on straight lines. (Figure 3 A, B, C). The results showed that the type of inhibition was competitive in which enzyme- inhibitor complex could form.

Now a days, the dependency of the medicine on plants materials is becoming clearer. However, this dependency upon medicinal plants is still not widely acknowledged. Plants possess a large number of vital compounds that might form a part of healthy diet. Traditionally, different parts of plants were used directly as pharmaceuticals. Clinically useful chemicals are now being obtained from plants even those that have not been classified before as medicinal plants (10). Walnut (J. regia Linn) is the most widespread tree nut in the world that has been used in human nutrition since ancient times (11).            J. regia leaves have been traditionally used for the treatment of disease such as cold and sinusitis and as an antimicrobial and antidiarrheal substance (12). Recently it has been shown that the consumption of walnut leaf in alloxan induced diabetic rats at the dose of 185 mg/kg reduced fasting blood sugar which suggests an antidiabetic effect for this plant. Methanolic and ethanolic extracts of J. regia leaves have been prepared and the effect of these extracts on fasting blood sugar of alloxan induced diabetic rats has been studied. The results showed that fasting blood sugar decreased meaningfully in diabetic rats treated with J. regia. Also there are some reports about the inhibitory effect of leaves methanolic extracts of J. regia on intestinal sucrase and maltase enzymes (8). U. dioica has also been studied for its medicinal effects. It has been shown that the water extract of this plant had antioxidant, antimicrobial and analgesic activities (13). Here we investigated the inhibitory effect of the leaves water extracts of U. dioica and J. regia on porcine pancreatic α- amylase. The plant extract significantly inhibited PPA activity in vitro. Our results showed that these extracts had concentration dependent and time dependent inhibitory effect on PPA. These results are in accordance with the results of previous studies.

To characterize the inhibition process (i.e., competitive, noncompetitive, or uncompetitive) data are often analyzed by techniques that linearize inherently nonlinear relationships. 0ne technique is the Dixon Method (14). The Dixon plot is frequently used for identification of the likely mechanism of enzyme inhibition. Plots were prepared of the reciprocal of rate of product formation (1/V0) versus inhibitor concentration at each substrate concentration. The initial velocities (V0) were determined from the slope of the linear part of the curves of the amount of product, in terms of mM of maltose equivalents, versus time in minutes (data not shown).

Here, Dixon plot was depicted for both extracts and acarbose as the standard inhibitor of PPA. Acarbose is a strong competitive inhibitor of                    α- amylase.  This compound has a pseudosugar ring and the glycosidic nitrogen linkage that mimics the transition state for the enzymatic cleavage of glycosidic bond and hence competitively inhibits α- amylase (15). In our study, Dixon plot of acarbose revealed the competitive inhibition pattern of PPA. On the other hand, Dixon plots of the both extracts showed the same pattern as that of the acarbose. For the first time, the mechanism of inhibition for U. dioica and J. regi extract was investigated and the results showed that the extracts inhibited PPA through competitive mechanism. Probably, there was a compound in the extract that could compete with the substrate for binding to the active site of the enzyme. This mechanism is usually seen for the competitive inhibitors.

The data from this study could provide a basis for further investigations where the active component that results in PPA inhibition could be isolated. The knowledge about the mechanism of inhibition by plant extract could provide successful use of the plant chemicals as drug targets.

The authors express the gratitude to the research center of molecular medicine and research council of Hormozgan University of medical sciences, Iran for the financial support.