Diabetes mellitus (DM) is a group of metabolic disorders in which the main characteristic is hyperglycemia (1). Diabetic patients, especially those with uncontrolled blood sugar have a high incidence of liver dysfunction (2) which is characterized by an increase in alanine and aspartate aminotransferases (ALT & AST) (3). Oxidative stress is the result of an imbalance between radical-generating and radical-scavenging systems which could be due to enhanced free radical generation or decreased activity of antioxidants or both. During diabetes, constant hyperglycemia will increase the generation of free radicals especially reactive oxygen species (ROS) through glucose auto-oxidation and protein glycosylation (4). Herbal remedies have been used as efficient and secure alternative treatments for hyperglycemia and liver toxicity. There is an increasing concern regarding the herbal remedies due to their effectiveness, minimal side effects and relatively low cost. The use of herbal remedies or their extracts are widely recommended, even when biological effects of their compositions are unclear (5). Natural grape seed proanthocyanidins are biologically active polyphenolic flavonoids which are known as oligomeric proanthocyanidins. These proanthocyanidins have demonstrated a marked spectrum of biological, pharmacological, therapeutic, and chemoprotective properties against oxygen free radicals and oxidative stress (6). A previous study demonstrated that proanthocyanidin has protective effects against liver injury induced by stress oxidative of doxorubicin (7). Considering these properties of grape seed proanthocyanidins (GSP), this study was designed to evaluate the hepatoprotective effects of GSP on streptozotocin-induced diabetes in rats.

Fifty male Sprague-Dawley rats weighing 150-170 g were obtained from Central Animal House of Ahvaz Jundishapur University of Medical Science (AJUMS) Ahvaz, Iran. All animals were maintained in controlled environment (12 hr light/dark cycle). All experimentals were carried out in accordance with the guidelines of the Ethics Committee of Ahvaz Jundishapur University of Medical Sciences, Ahvaz,

Iran. Rats were divided into five groups of 10 rats each. These groups were divided as follows: group 1: control, group 2: diabetic rats, and groups 3-5: diabetic rats receiving GSP. All animals were kept under observation for one week prior to the start of the treatment.

Treatment of the rats was started after measuring the blood glucose. Rats in the treated diabetic groups (groups 3-5) respectively received GSP 50, 100 and 200 mg/kg body weight. The GSP was dissolved in normal saline solution and given via oral gavage for 4 weeks (8-10 AM every day).

At the end of the experiment, six rats were randomly selected from each group, and were sacrificed under ether anesthesia. Blood samples were collected from the left ventricle and the sera were prepared following centrifuging at 2500×g for 15 min at 30°C. Serum biomarkers of the liver function including ALT, AST, alkaline phosphatase (ALP), albumin, and total bilirubin were measured using commercially available kits (Pars Azmon, Iran).

Following the sacrifice, the livers were immediately removed and washed with isotonic saline. Then, the liver tissue was minced and a homogenate was prepared with 5% (w/v) potassium phosphate buffer (0.1 M, pH 7.4) using a homo-genizer (Heidolph Silentcrosher M, Germany). The homogenate was then centrifuged at 16000×g for 20 min to remove nuclei and cell debris. The supernatant was used for the lipid peroxidation and antioxidant activity measurement.

According to the method previously described (6) 0.5 ml of the supernatant was added to 1.5 ml trichloroacetic acid (TCA) (10%). After centrifu-gation (4000×g for 10 min), 1.5 ml of supernatant was mixed with 2 ml thiobarbituric acid (TBA) (0.67%) and was kept for 30 min at 100°C. They were allowed to cool after that, 2 ml of n-butanol was added to the solution then the mixture was vigorously vortexed and centrifuged at 4000× g for 15 min. Finally, the pink supernatant absorbance was read at 535 nm using a blank containing all the reagents except for the tissue homogenate. Values were expressed as nmol/mg protein. As 99%  of  the  TBARS  is  malondialdehyde  (MDA), TBARS concentrations  of  the  samples  were  calculated from a standard curve using 1,1,3,3-tetramethoxypropane. 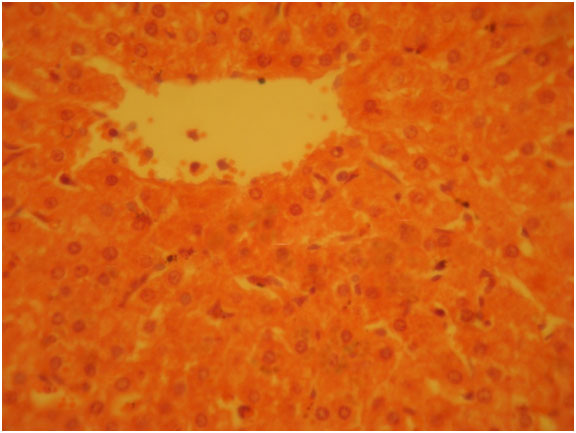 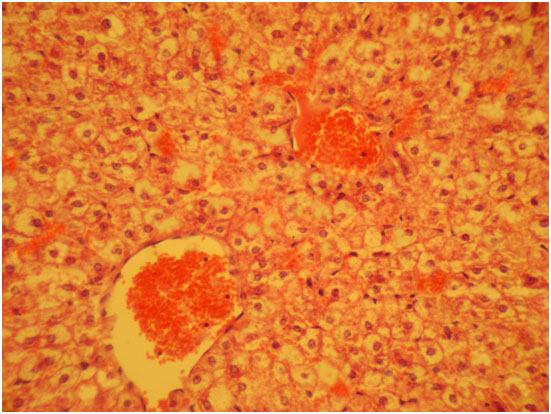 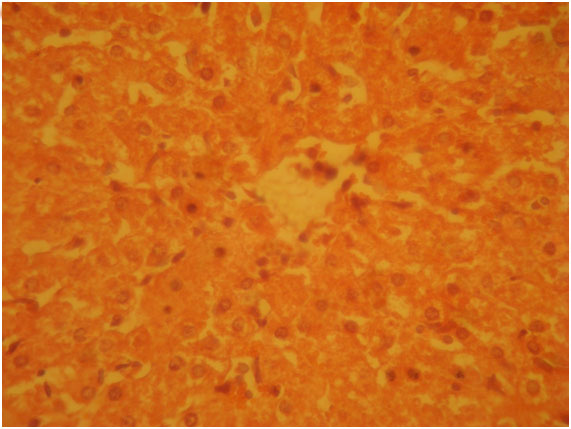 Superoxide dismutase (SOD) and glutathione peroxidase (GPX) activities were determined using the diagnostic kits RANSOD and ANSEL (RANDOX, UK) and were expressed as unit/mg protein. Protein content of the samples was measured by the method of Bradford (8).

The livers were fixed in 10% neutral buffered formalin, dehydrated with 50–100% ethanol solutions, and then embedded in paraffin. Tissues were sectioned at 5 μm thickness, followed by haematoxylin-eosin staining before subjecting to photomicroscopic observation.

Data are expressed as mean ± SE. Statistical significance of differences was assessed by one-way ANOVA using SPSS for Windows (version 15) followed by Tukey´s -test. P<0.05 was assumed as statistically significant.

Figure 1 shows the structure of hepatocytes in the experimental animals. The morphology of the liver in control group was normal and pathological changes were not observed, hepatocytes made up interconnected plates and the plates arranged radially around the central vein. The spaces between these plates contain liver sinusoids. Pathologic alterations were observed in the animals of diabetic group. Hepatocytes relative lost their usual concentric arrangement and the sinusoids were congested. In this group, the hepatocytes showed clear grades of cloudy swelling with cytoplasmic vacuoles and pycnotic nuclei were seen in some cells (Figure 1B). Treatment with GSP showed marked improvement in hepatocytes structure. Also, nuclei and cytoplasm had normal structure. Hepatocytes arrangement and sinusoids congestion largely returned to normal as compared with the diabetic rat (Figure 1B).

Our results demonstrated that FBS was significantly decreased in diabetic rats treated with GSP. It may be due to the potential of GSP in increasing insulin level in the blood and so decreasing glucose levels in diabetic rats (9). In the present study, significant reduction in serum albumin level and elevations of the levels of the liver injury markers (ALT, AST, ALP, and bilirubin) indicate the hepatocytes injury in experimental diabetes. Individuals with diabetes have a higher incidence of liver function test abnormalities than those who are not diabetic (10). The data of this study also indicated that daily treatment with GSP considerably improves biochemical status of diabetic rats. Liver function tests (LFTs) are generally used in clinical practice to screen the liver diseases, monitor the development of known diseases, and monitor the effects of drugs that may cause hepatotoxicity. The most common LFTs include the serum aminotrans-ferases, alkaline phosphatase, bilirubin, and albumin (10). Hepatocyte injury or hepatotoxicity results in the release of the liver enzymes into the blood circulation, thus increases liver enzymes level (11). Diabetes induced by STZ in rats causes liver tissue injury, which is associated with the elevation of serum hepatic enzymes, such as ALT and AST (12).

The above mentioned enzymes turned back to their normal serum levels after treatment with GSP perhaps due to prohibition of intracellular enzyme permeation created by cell membrane stability or cellular regeneration. Efficient adjustment of bilirubin and albumin indicates early recovery of functional and secretory activities of hepatic cells (13). In this study, significant reduction of antioxidant enzymes (SOD, GPx, CAT) activity as well as significantly increased MDA level show oxidative stress of the liver in experimental diabetes. Lipid peroxidation is generally used as a marker of tissue oxidative stress, in which oxygen reacts with polyunsaturated fatty acids and creates lipid products such as MDA and 4-HNE, and increase production of free radicals, leading to the injury of cell membrane, cell necrosis and inflammation (14). SOD and CAT are two major scavenging antioxidants which eliminate free radicals in vivo. A reduction in the activity of these antioxidants provides abundant accessibility of superoxide anion (O2-) and hydrogen peroxide (H2O2), which subsequently produce hydroxyl radicals (.OH), due to the production and proliferation of lipid peroxidation. SOD dismutases the O2- free radical to H2O2, which is then turns to H2O by CAT or GPx (16). It has been demonstrated that the activity of these antioxidant enzymes (SOD, CAT, GPx) is reduced in diabetic rats (6). Our observations also showed that daily treatment with GSP significantly increased antioxidant enzymes activities and markedly decreased MDA level. These results are similar to a previous study (6).

Last evaluations indicated notable alterations in the liver structure such as fatty change in short term (3).  In the present study, oral administration of GPS improved structural changes induced by diabetes. This preservation by GSP may be due to both inhibition of metabolism and/or detoxification of cytotoxic radicals. In addition, its presumed contribution to DNA repair may be the other important attribute, which plays a role in its protective effects. This effect possibly involves the inhibition of neutrophil infiltration and lipid peroxidation, thus restoring oxidant and antioxidant activity (14). Our findings are in agreement with a previous study(7).

The results demonstrate that GSP can improve serum biomarkers and histopathologic changes of damaged liver tissue in diabetic rats. It is therefore likely that GSP is prophylactic against diabetic complications and ameliorates diabetic hepatopathy through its antioxidant properties.

The authors would like to thank all the staffs of Cellular and Molecular Research Center of AJUMS. This work was supported by a grant from Deputy of Research and Technology Development of AJUMS (research project No. U-91225).